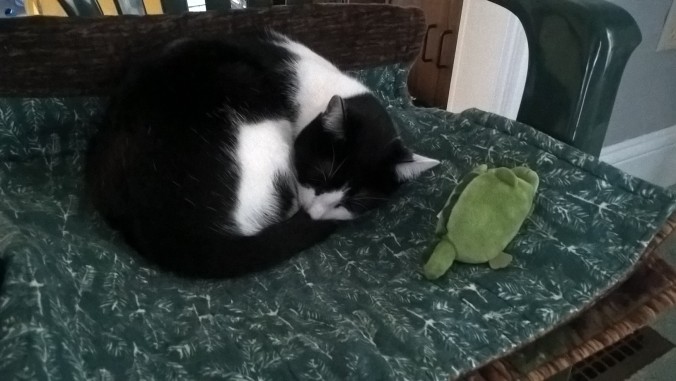 Many times, I have written about the magic number three in my decluttering/minimalism goals. Three items on a surface, three things hanging on a wall … This week the magic of three does it again.

Minimalist Mondays this year are a way for me to try to organize and declutter my house. I want to be sure what I have is only what I love and what I need. Just because I have double the space now, does not mean I need double the stuff.

This week was kind of a wash. I have not been feeling well for most of it. Thursday I was pretty much a vegetable. For minimalist Monday this month, I have four Mondays to address the area in question for January. That area is one of two walk-in closets. Since there is a holiday coming up on January 21, I am hoping to catch up then since I have been under the weather this week.

Where the magic of three fits into all of this is in cleaning. My goal in decluttering is so that I can actually enjoy my life my being able to do things and not be chained to this house having to clean it all the time.

This week I discovered that by putting three CDs into the CD player, I can clean the whole house. #Score

Three CDs of cleaning. It’s not as bad as it sounds.

Once the kitchen floor was mopped and the second CD was spinning merrily along, I took a break. Not only did I take a break, but I cranked the volume and danced around in my socks (and Victoria’s Secret yoga pants, of course #weekend) a la Tom Cruise in Risky Business.

I’m sure if any of the neighbors bothered to look in any of my windows they were probably laughing hysterically. I mean, I washed all the windows, so they definitely had a clear view.

One of the things I absolutely love love love about the house is that all of my CDs are unpacked and out. They are displayed, organized, and ready to use. Not only that, but I can play them as loud as I want. In the apartment, the maximum stereo volume was 10. In my house, the minimum stereo volume is typically 16.

So for the second CD of this exercise, I took a break from cleaning. If you decide to try this at home, be sure to pick some kick ass tunes for all three discs.

It basically took three CDs to clean the house. It was a lot more fun with music.

Now, with both upstairs and downstairs, when the CD ended, I had everything done except mopping. I hate mopping, so I always leave it for last. My personal goal is to get the house minimized enough so that by the time a CD ends, the entire area of the house is clean.

We’ll see how that goes. It may be wishful thinking. Three CDs worth of time to clean an entire 1600 square foot house is pretty good, I’m thinking.

When I am feeling better to get to minimalism Mondays this month, the area for January is one of two walk-in closets. Some of this is organization. For example, the walk-in closet in question has all my camping stuff. However, I have found camping equipment in two other locations in the house. It’s a consequence of moving. Part of minimalist Mondays is going to be recreating my “zones” in the house. Once I get all of the camping equipment together, then I can evaluate it.

For the record, while many people’s walk-in closets are jam packed with clothing, mine are not. I have been doing pretty well with my minimalist wardrobe. My walk-in closets are mainly storage for seasonal and sentimental items. I’ll be going through things like camping, running gear, luggage, Christmas, fans, and the “sentimental” box when I finally hit the closet this month.

I would love to get everything down to one walk-in closet instead of two, but I don’t see that happening. I have too many summer hobbies that require equipment. Yes, I actually do USE all of that equipment.

Maybe when I’m engaging in minimalist Mondays, I will have to invoke the magic of three. If I can use three CDs to clean the entire house, I should be able to use three CDs to declutter and organize and entire closet, right?

I’ll let you know how it goes.

In the meantime, I’ll just be sitting here in my shades grooving to some cool tunes in my clean house.