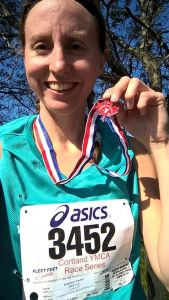 I was going to title this post “The Comeback Kid Runs Again,” but then I realized I would have to flashback to 2009 to explain that. To keep a long story short, Running Legend Bill Rodgers (4 time winner of the Boston Marathon AND 4 time winner of the New York Marathon) gave me the nickname of “The Comeback Kid” after hearing the story of how I ran a half marathon in Ottawa  only days after having my casts sawed off when I had broken both arms at the same time.

I overcame many challenges to run that race, and I have done it again. Only 10 months after being hospitalized for stroke, I finished another half marathon. It is my second worst half marathon time ever, but it was the sweetest finish line I’ve had in a long time.

This year I signed up for a small, local race trying to keep it real given the obstacles I have overcome in reaching the start line. All I wanted to do was prove to myself that I can still run distance and cross the finish line. I wasn’t expecting a medal and there was none advertised. But, surprise, surprise, not only was there a medal at the finish line, but friends too, and it was the best feeling!

So my math is all blown to hell. Remember in Going Local, I was gushing over the plan for Philly 2018 to be my 15th medal and blah, blah … well, I got my 15th medal this year. I couldn’t be happier. My math for the 2018 running season is totally screwed and I am completely fine with that. The medal I got for this 2017 race is one of my top 3 medals in terms of what it means to me. I was seriously facing a running career ending health condition last year when I could not drive or run after having my stroke. I cannot begin to describe how much this medal means to me.

While I talk extensively about races I have ran, I have never outright endorsed a race. *spoiler alert* I’m going to do so now. Please note I was not asked to do this and am receiving nothing for doing so. I’m just that impressed with this race that I want everyone to know about it. If you’re ever in the Central New York area at the end of September, there is this tiny race called the Leaf Peeper Half Marathon that is put on by the Cortland YMCA in Cortland, NY. It’s amazing in so many ways.

The Leaf Peeper was my 15th race overall. It was also the smallest. It is extremely well planned. Arrive an hour early on race day to pick up your bib and t-shirt. There is plenty of parking, plenty of rest rooms, and super nice people. The race fee is a complete steal, especially for someone like me who is used to the big city races with 30,000+ runners. All the money benefits the local YMCA and is completely worth it. It doesn’t get any better than race for a good cause.

The course is well marked and there is plenty of support. The volunteers at the road crossings are friendly. There is not a lot of traffic on the route. The route is a very gorgeous run through the rolling hills of Central New York. You can, indeed, see the leaves peeping across farm fields and streams. The race is aptly named. The scenery is spectacular in the morning as the fog is burning off at the beginning of the race.

The volunteers at the water and Gatorade stations are so polite. Some aid stations even had real food like m&m’s and bananas. I will take a banana in a race over a gel any day! Leaf Peeper rocks for best volunteers at a half marathon. There was also bicycle support, which I was not expecting for such a small race (very impressed), and each mile was clearly marked!

At the finish line, there was great crowd support. There was plenty of water, Gatorade and snacks at the finish. The race was professionally timed with the timing chips built right into the bibs. This race is a hidden gem, and I highly recommend it to anyone. It’s great for a first half marathon. It’s also great for more experienced runners like myself.

I actually made a challenge for myself with this race – I ran without my iPod even though I knew there was minimal crowd support on the rolling country miles. I survived. I went into this race treating it like just another 13.1 mile run, but by the time I finished, I realized this is truly a race, and an excellent one at that. I completely underestimated the Leaf Peeper.

It’s too late for you to run this hidden gem in 2017. Now is the perfect time to put it on your bucket list for 2018. I will definitely be back to run the Leaf Peeper Half Marathon. Maybe not next year, as I already have a race planned, and my body is only capable of one long distance race per year, but I will be back for the Leaf Peeper again.

That was another huge plus – I finished the Leaf Peeper uninjured. After the significant injury to my hip in 2015, I was worried when I saw hills in the Leaf Peeper. I listened to my body and navigated them fine. My finish time may have been slower, but I ran a good race and finished uninjured. It was a great experience in my book.

I am officially in my off-season now for running, as my race is complete for the year. I am going to have a short rest. One day off for each mile raced, you know! Then, I’ll be back at it getting ready for 2018. If you are still in the planning stages for your 2018 race season, consider the Leaf Peeper Half Marathon. I highly recommend it!

One thought on “Hidden Gems”