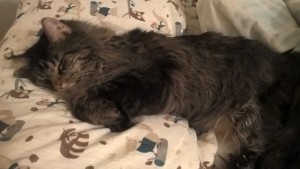 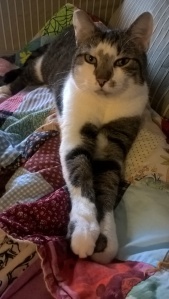 We have a snow day today. My work is closed. We got over a foot of snow overnight, and are currently experiencing inch an hour accumulation. It’s supposed to top out at 20 inches total today with 40 mph winds blowing all the fluff around. The Sheriff just closed all the roads were I live less than 10 minutes ago.

In my adult experience, snow days have primarily been announced at the last possible minute. There have been many times when I was on the road driving to the school, and then they finally announced the school closure on the radio so that I could turn around and go home. There were days when I hemmed and hawed over whether I thought it safe to try to get to the school when a snow day was not called, but the roads still treacherous, and I had to travel through two different counties to get to the school.

Today was the first time in my life that I experienced a snow day with the day delight as I did as a child. I had not even gotten up to look outside yet. In fact, my alarm had not even gone off yet. I was just kind of waking up and groggy when I received the alert announcing the snow day.

I don’t remember a snow day being called this early since I was a child. It was a wonderful experience to have the stress and pressure of trying to ascertain driving safety taken off my shoulders. My snow tires are not on my car yet (they were actually scheduled to be put on today), and after looking outside, I am not even going to be able to drive anyplace to have them put on. I have not been confident driving lately.

I was in the hospital last week. For the past two weeks or so, I have been having blackouts and these feelings of “I’m going to pass out.” The hospital put me through stroke protocol. When I first entered the hospital, they thought either I had a stroke or was about to have a stroke. I spent last week on a heart monitor. I honestly do not think that the cardiologist or any of the other physicians know what is happening. I also do not think that they care.

If I am in one place, I can deal with the passing out feeling. The worst that will happen is that I hit the floor. The problem is that I have been blacking out, and it happened once when I was driving. That is a concern.

Trying to drive the past week has been challenging. I either have to try to get a ride places or drive to the park and ride to get the bus to work. Even the bus cramps my style; the bus schedule does not accommodate my work hours.

Having a snow day today was a huge weight off my shoulders. In addition to trying to judge weather conditions, I have been trying to figure out on a day-to-day basis whether or not I am physically well enough to drive. It is very frustrating when the doctors have basically done nothing to help. The only thing I have been told is that blood is not reaching my brain, so I need to lay down with my legs in the air. That does very little to help me to function on a day-to-day basis.

For the first time since I was a child, I am purely delighted to have a snow day. Not only was it announced early, before I even looked outside and say all the snow, but also it allows me to stay home and focus on listening to my body and trying to figure out what is going on with me.

I know that this week of Thanksgiving I am not only thankful for snow days, but also for good friends, that I am physically safe despite all the challenges I am facing (in the face of incompetent medical care in addressing the issues), and that I have a job I love. I have so many things to be thankful for this week that a heart condition, or whatever is going on is not going to get my spirits down. I’m going to keep going until I pass out or get better. But for today, I am going to enjoy my adult snow day. Cheers to hot mugs of tea, good books, and naps.