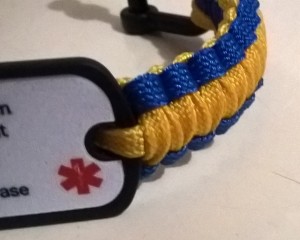 I’m so badass I come with a warning label like a Gremlin. You know, those cute furry things that you are not supposed to get wet or be fed after midnight. By the way, at what point in the morning is it no longer considered “after midnight?” I come with directions also. It’s called a medical alert bracelet. It lists all my food allergies plus my autoimmune disorder, so you know what not to feed me (or touch me with) a la Gremlin style. Unlike Gizmo, I do not sing pretty songs and look at you with soulful eyes.

Now that my autoimmune disorder has a diagnosis, I have a new, updated warning label. My warning label is still in my Boston Marathon colors and is made of military paracord instead of metal so that it can withstand the active lifestyle I lead when not being knocked down by my autoimmune condition. When I’m surfing, salt water is rough on jewelry. The metal IDs just don’t stand up to all the salt I put it through from salt water (surfing) to sweat (running) to tears (when I’m in pain at night).

Warning labels are interesting in that in order for there to be a warning, someone probably did the action, and there was probably a lawsuit about it. Think back to the huge McDonald’s coffee lawsuit, and now all coffee cups have a “Hot!” warning on them. What completely baffles me is that some warning labels seem to be common sense. Apparently, sense is not so common if it has to be on a label.

For example, “do not iron shirt while wearing.” Duh. Yet, for this warning label to exist, I am sure that means someone did actually iron a shirt while they were wearing it. There was probably a lawsuit following the event. Who did they sue? The company who made the shirt or the company who made the iron? Was it a one-person event where someone attempted to iron part of his or her own shirt while wearing it, or was it a two-person event where someone ironed a shirt while it was being worn by another person? Who on this planet thought this scenario was a good idea? Were you sober when you were operating the iron?

On a child’s superman costume: “wearing this garment does not enable you to fly.” This partially makes sense. Children engage in magical thinking. I can see how a child would either believe or pretend that the Superman costume could make them fly. I mean, come on, haven’t you played the game as a child where you would jump from one piece of furniture to another trying to avoid the “lava” on the floor? If you did not play this game as a child, you may want to rethink the epic-ness of your childhood. Hopefully the child wearing the Superman costume has an adult with common sense nearby who can explain that the costume does not make you fly so that the child does not get hurt. If you are an adult that thinks that you can fly while wearing a Superman costume, then I hope you live in a single floor dwelling, and can you please let me know what you are smoking? If an adult thinks they can fly, then you are on some pretty good stuff, or you need professional help so that they can give you some good stuff to correct your thinking.

Liquid plumber: “do not reuse bottle to store beverages.” Flashback to Grandma’s house where every time you open the refrigerator it was either like Christmas where every container is a surprise or some sort of Price is Right game where you had to guess the contents that are in butter tub # 1. Butter tubs, Cool Whip containers, these were the original Tupperware pieces minus the cool sucking sound. If your grandparents were alive during the Depression, they probably reused every container possible. You just never knew if that butter tub really held butter or some really yummy Thanksgiving leftovers. You did not need Cracker Jacks to get a surprise in every box when you could just open the refrigerator box and get a surprise butter tub. Yes, I do believe that “I can’t believe its not butter” holds the mashed potatoes, Bob.

Back to the liquid plumber warning label – who in their right mind would reuse this container for a beverage? Haven’t we established the Mason jar as the ubiquitous holder of all liquids from milk to beer to juice to wine? I mean, seriously, if this warning label is on the bottle, then someone must have actually reused a liquid plumber bottle to hold a beverage. Then, they must have sued liquid plumber due to the effect of reusing the bottle for a beverage. I’m sure there was bodily harm involved in this event. Really, what frame of mind was one in to do this in the first place? I know the feeling that sometimes we “don’t have a pot to piss in,” but that is a euphemism. It is not meant as truth. There was no other vessel of any kind any where for a beverage other than the liquid plumber container? Hmmmm.

My warning label gives a list of items that may potentially kill me. They are mostly food items. This is, of course, an oxymoron. Food is supposed to keep us alive, not kill us. This is a special kind of hell I live in. Of course, there are a lot of other things that could kill me too like tornadoes, or airplanes, or cancer. No one gets out of this world alive. At least it’s not like the old pea-green Oregon Trail screen where someone dies of dysentery or something weird like that. We’ve been able to eradicate quite a few diseases. Plus, I don’t have a covered wagon, so I have to come up with some other way to die.

I wear my warning label everywhere except when I am inside my house. My home is the only place where I can be that I am certain does not contain any of my allergens. It is the only environment over which I have total control. I don’t live in a bubble, but my house is probably as close to the bubble lifestyle as it gets. Too bad it doesn’t come with an airlock like some cool NASA spaceship. “Please stand clear for detox from top 8 allergens.”

Anyways, my updated warning label arrived the other day. This is one of those moments where sometimes you just need to laugh so that you don’t cry. Laugh now, cry later, right? At this point, I would just like to comfortably sleep through the night and be able to function at a more optimal level during the day. Beggars can’t be choosers.

What warning label do you come with?