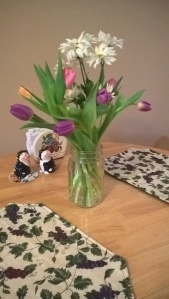 This weekend, I totally splurged in honor of my birthday and did something epic three days in a row. It kind of helped that the weather finally warmed up. I have counted less than 20 days since October 24, 2015 that I woke up and did NOT find snow on the ground, so the fact that we have been snow-less for almost a week now has really brightened my mood.

Perhaps the best thing I did over the past three days was to take myself to the movies to see Deadpool.

I have a new favorite super hero.

Daylight savings time this week has totally screwed with me, so I admit to being more sleepy and confused than normal; it took me awhile to realize the satire in the opening credits of the film (I won’t spoil it by giving you particulars). Not to mention, my autoimmune disorder that completely wrecks havoc with my sleep schedule has made it so that I am now awake at 4 am every day. I suppose this is an improvement from being awake from 2 am to 6 am, but still. If I’m awake at 4 am, I better be running a marathon, and in the case of the past week, I have been awake at 4 for health reasons having nothing to do with running.

In fact, my current sleep deprived and grumpy disposition is one of the reasons why I am singing the praises of the movie Deadpool like a hysterical teenager who has had too much Mountain Dew and Pop Rocks.

This flick mirrors my life and it does so in the most hilarious way.

I often try to make light of or joke about things because I am a big proponent of laughing and not crying. Sure, there are times to be serious. I am not a complete jerk. But we have to realize that sometimes you just have to laugh at yourself. Do not take life too seriously. No one gets out alive. Sometimes you need to laugh so that you do not cry. Laughing reminds us we are alive. It helps spread hope.

I am a Non-Hodgkin’s Lymphoma survivor, and now I have multiple food allergies, multiple medication allergies, and an autoimmune disorder. This is all adult-onset. When I first went into anaphylactic shock in my mid-20s, no one had any idea to what I was having a reaction, as I had no known allergies. I was not one of those kids who grew up with a food allergy. In the 80s? Food allergy? What’s that?

To make the situation even better, my allergies are so severe that I react by touch. A few years ago, when I was teaching pre-school, one of the students spilled their milk on me. Not only did I go into anaphylactic shock, but also I had multiple organs that started to fail and quite literally almost died. They may say, “don’t cry over spilled milk,” and in general, I would agree. I do not cry over spilled milk. I writhe in pain over it.

So the basic plot for Deadpool hit really close to home for me. Here is a man dying of cancer, and the cure leaves him with this awesome mutation that gives him all these super powers, but also results in this really horrible skin condition. He beats cancer (check), gets a skin condition (check), and has super powers in the form of healing (the reverse of my autoimmune disorder, but close enough, so check).

Deadpool spends most of the movie searching for Francis to “cure” him of the superpowers and skin condition much in the way I visit various specialists such as immunologists and dieticians to try to deal with my food allergies and autoimmune disorder. I have got to admit, that Deadpool does all this with a lot more style than I do. No wonder he has his own movie and I don’t.

This man’s sense of humor is incredible. If there was ever a person who can laugh over something instead of cry over it, then Deadpool is IT. In the super hero universe, Deadpool is refreshing. Each super hero has their own hard luck story that they have overcome to be this incredible person. Superman’s planet blows up, Batman’s parents get killed, and Spiderman gets bit by this freaky-ass spider, Deadpool gets cancer. Superman is mysterious, Batman is broody, and Spiderman is a little ADHD for me. Deadpool is a breath of fresh air.

The man tells it like it is. When you have some major disease or chronic disorder, people whisper about it. It is not “appropriate” to talk about. Deadpool has no filters. The movie had me in stitches the entire time so much so that I completely forgot I have an autoimmune disorder making my life hell for the 2 hours I was in the theatre. That is no small feat. Like the movie, my autoimmune disorder involves a skin disorder also, so I see my disease every day. Until I am healed and done with this episode I am having, it is continuously in my face, for me, and the rest of the world, to see.

I enjoyed this movie so much that I want to see it again. For the record, there has only been one movie in my lifetime that I have actually paid to see twice in the movie theatre. That movie was the Beatles musical Across The Universe. If Deadpool is still around on my next day off, then this flick could be the second film I pay to see twice in a theatre. We will see how much longer it plays.